How is everyone doing this evening??
I just came home from work, and thought, let's make a post

As the name of this post say's a new start of my SAL,
You could see I got the official fabric for it from Rita in my last post.
So now time too start!!
It's my very first time stitching on linen, and I like it very much.
I need to look a bit better with counting ( I'm also almost 30 .. whahahaha getting older), but it's going good.
Here you can see my start: 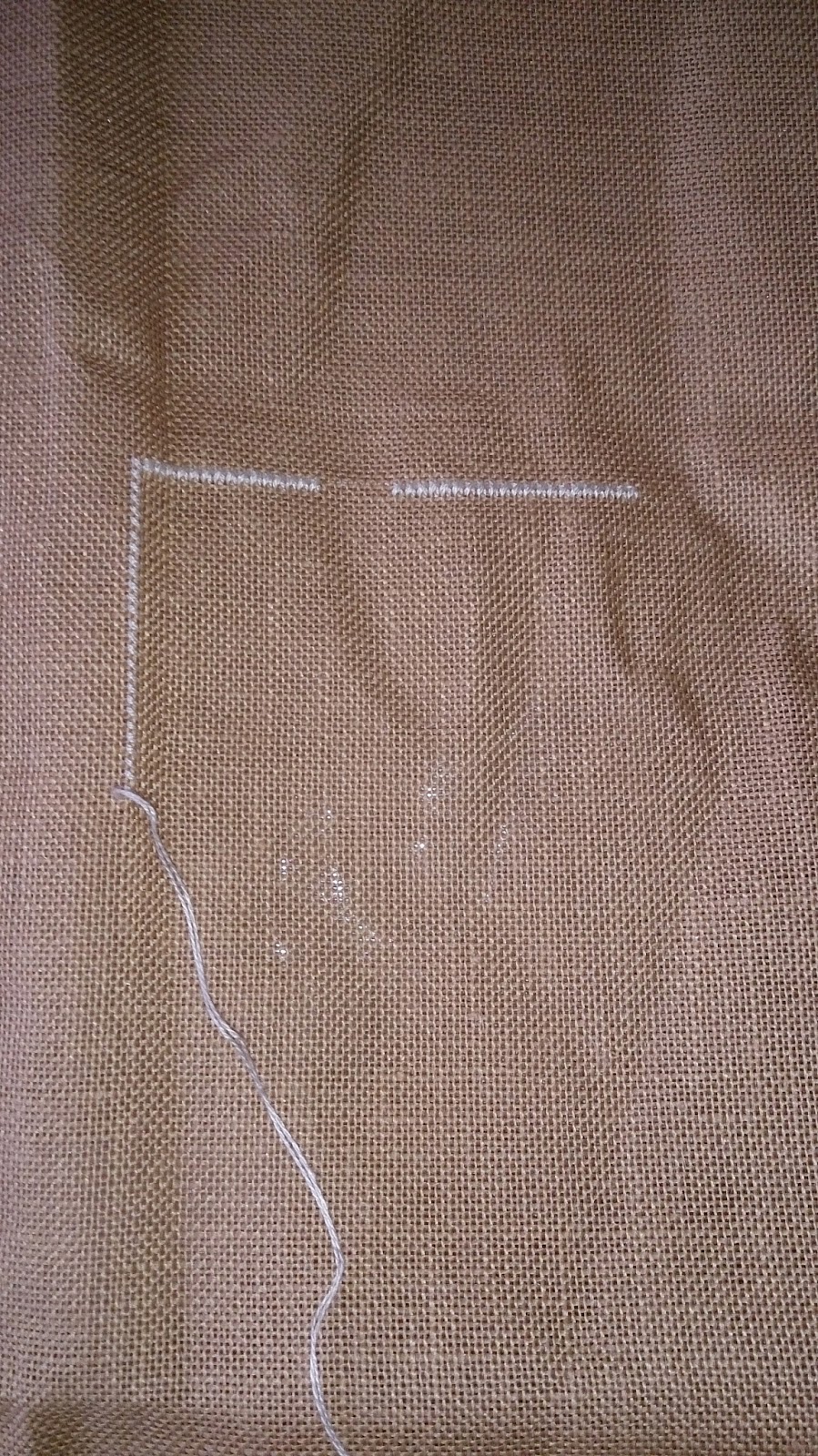 It's a little progress, but this week will try and do a bit more

Then I think I have a lucky angel on my shoulder.. ;))
2 weeks ago 1 entered a give-away on Facebook, and I won. :)
It's was a crochet bracelet for your daughter/niece or granddaughter
Let I tell you that Kira was very very happy with her gift 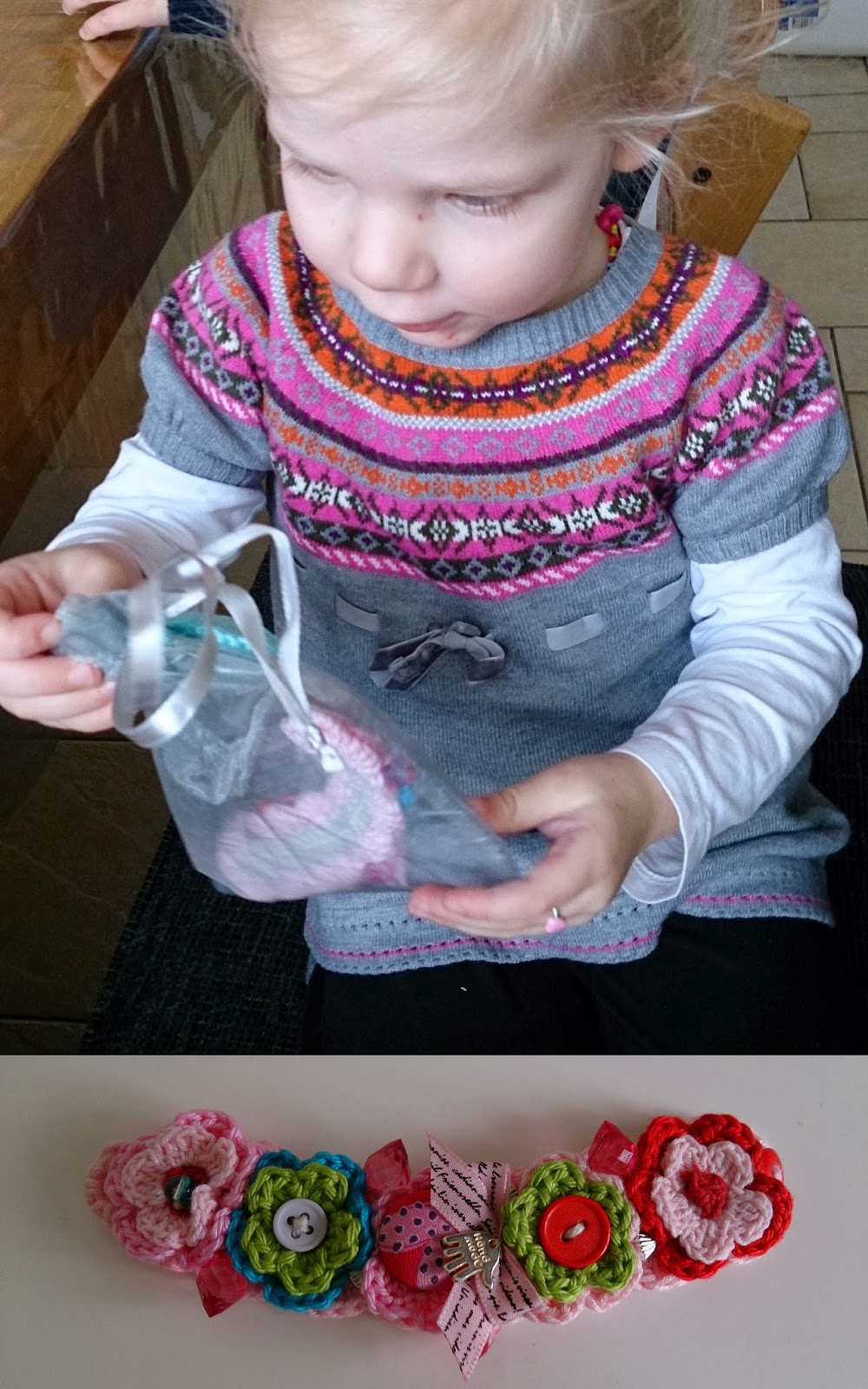 It's a very beautifull bracelet.
I send a pic to the designer/maker of it, and she photoshopt is so beautifull, I have to show it 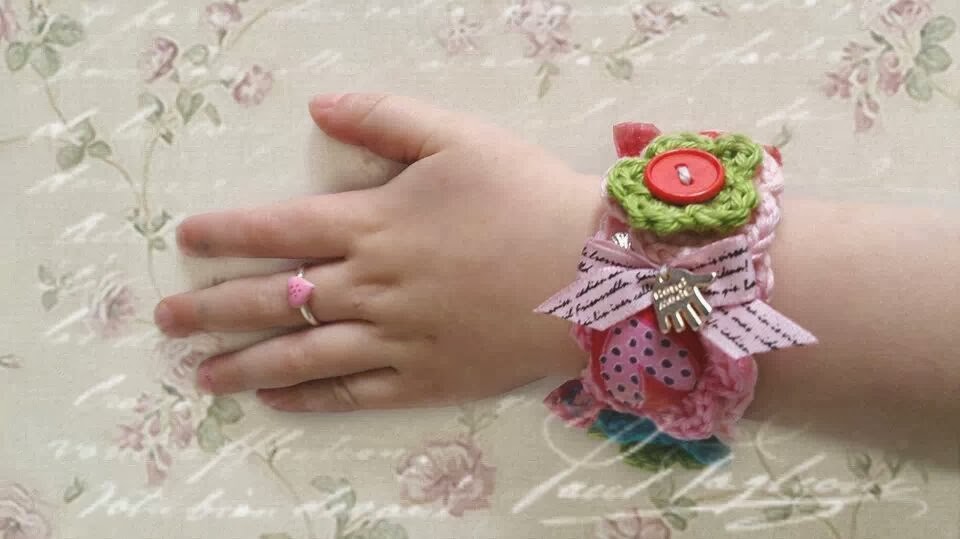 Isn't that pretty.. it also looks so great on her hand..
She is very happy with it and often she puts it on!!

But that's not the only give-away I won.
Kronova, also did a give-away, fabric from her own big stash,
and yesterday a big box was deliverd.
Kira was on top of it, because Kronova put all colors in there for Kira, as she has 3 big girls of her own
Look at this 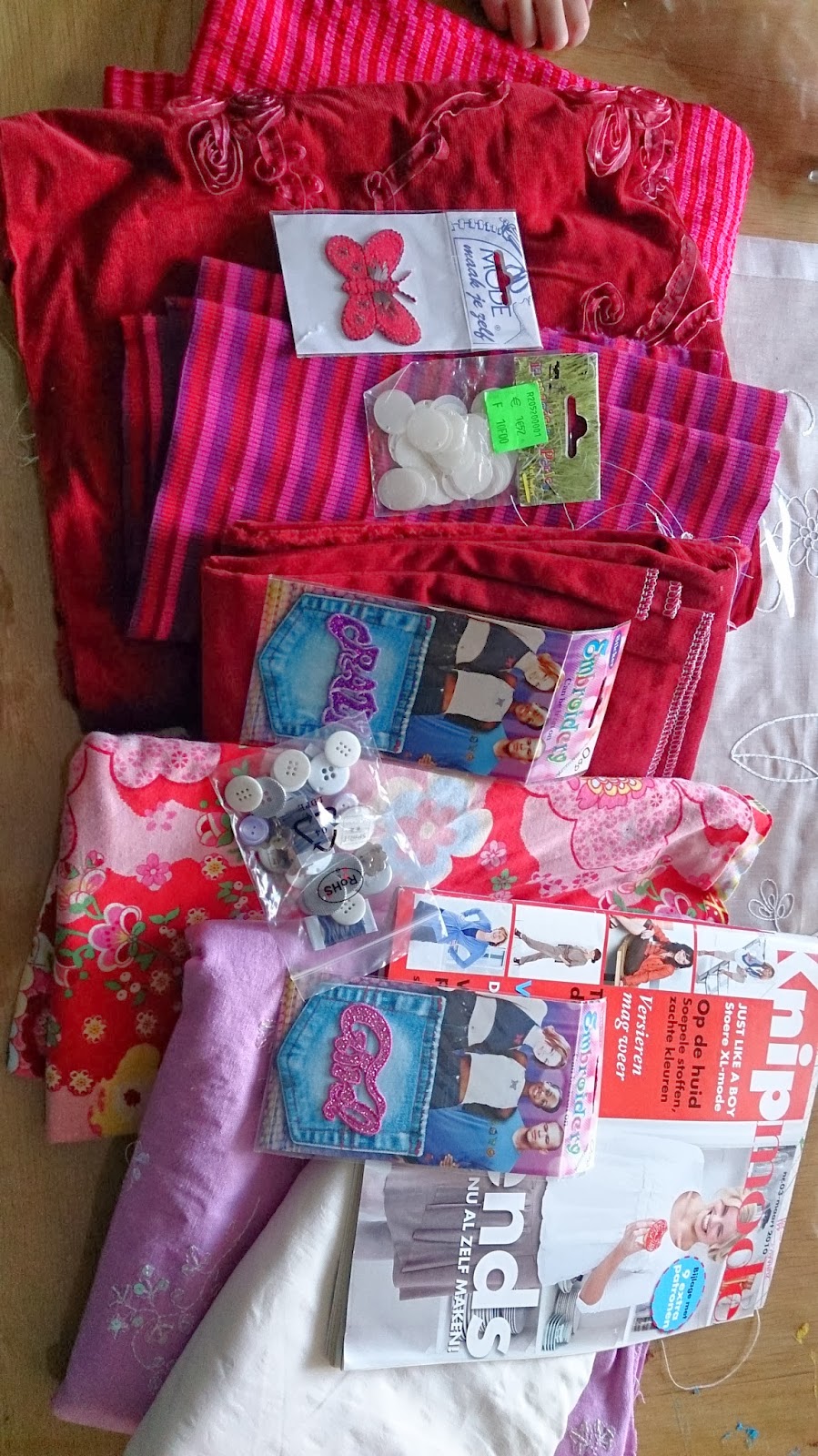 And as sweet as she was, she also sells many of her pattern that she don't use anymore. she asked me if there was something there for me, but I couldn't find something but I did remember she made one time a awesome cardigan for her Daughter,
And as a surprise she put the whole magazine in the box..


Awesome, Thank you so much Kronova

And if that isn't enough, Yesterday I won another one on Facebook, that will probably be her on wednesday..
Can I feel luckier then that??

I know here and there is terrible weather,
We only have a lot of rain and wind.


But that rain is very very good for my garden.
Just made 2 pic's to give you all a bit of a Spring feeling 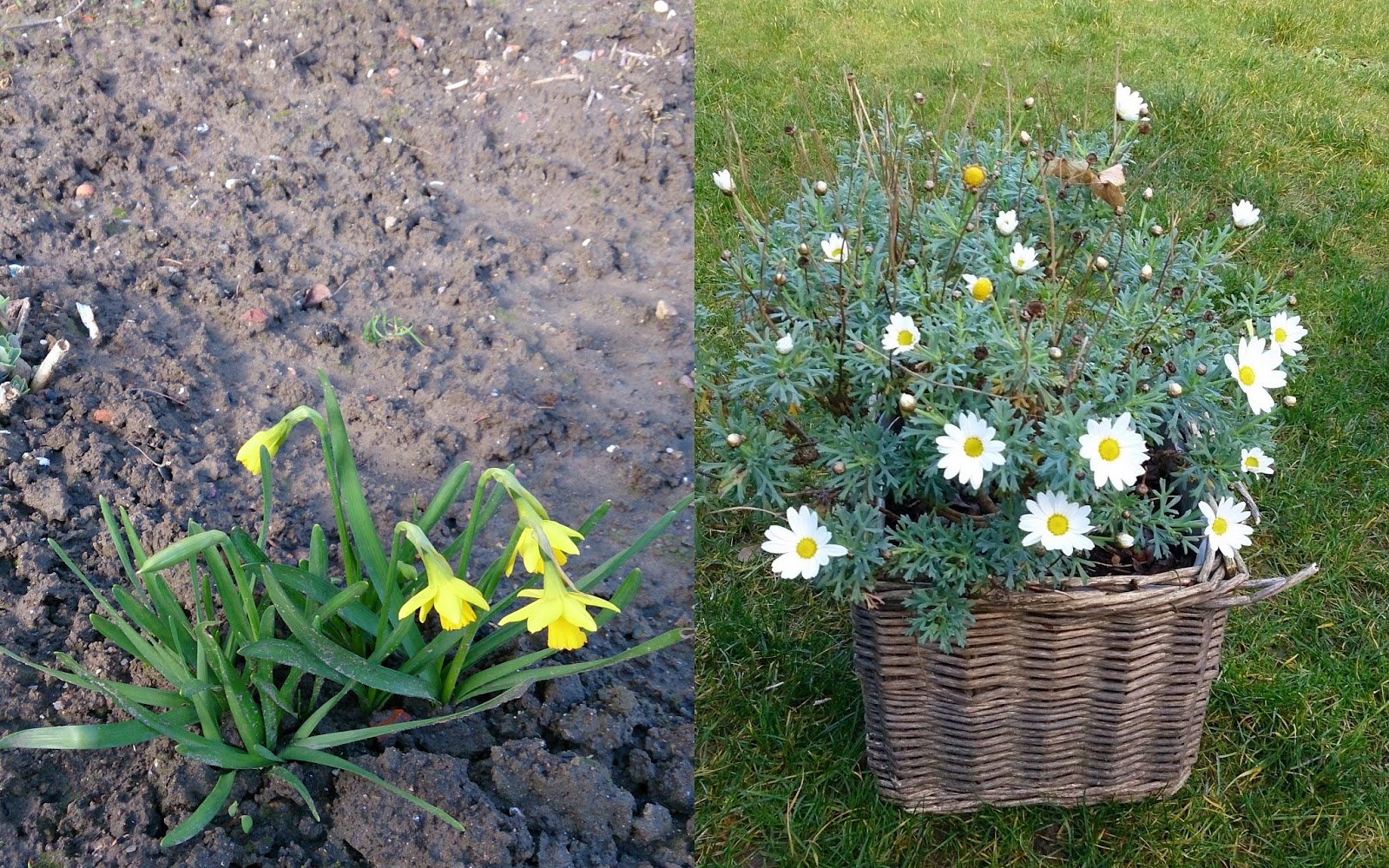 (the white flower normally dies every winter, but it's not cold enough,
so It's getting back im bloom again. That was a good spend of my money.. lol )
And if that doesn't give you enough feeling of Spring,
Today was a awesome beautifull day, it was cold and windy, but the sun was shining so strong,
so I thought lets make a big walk with Kira 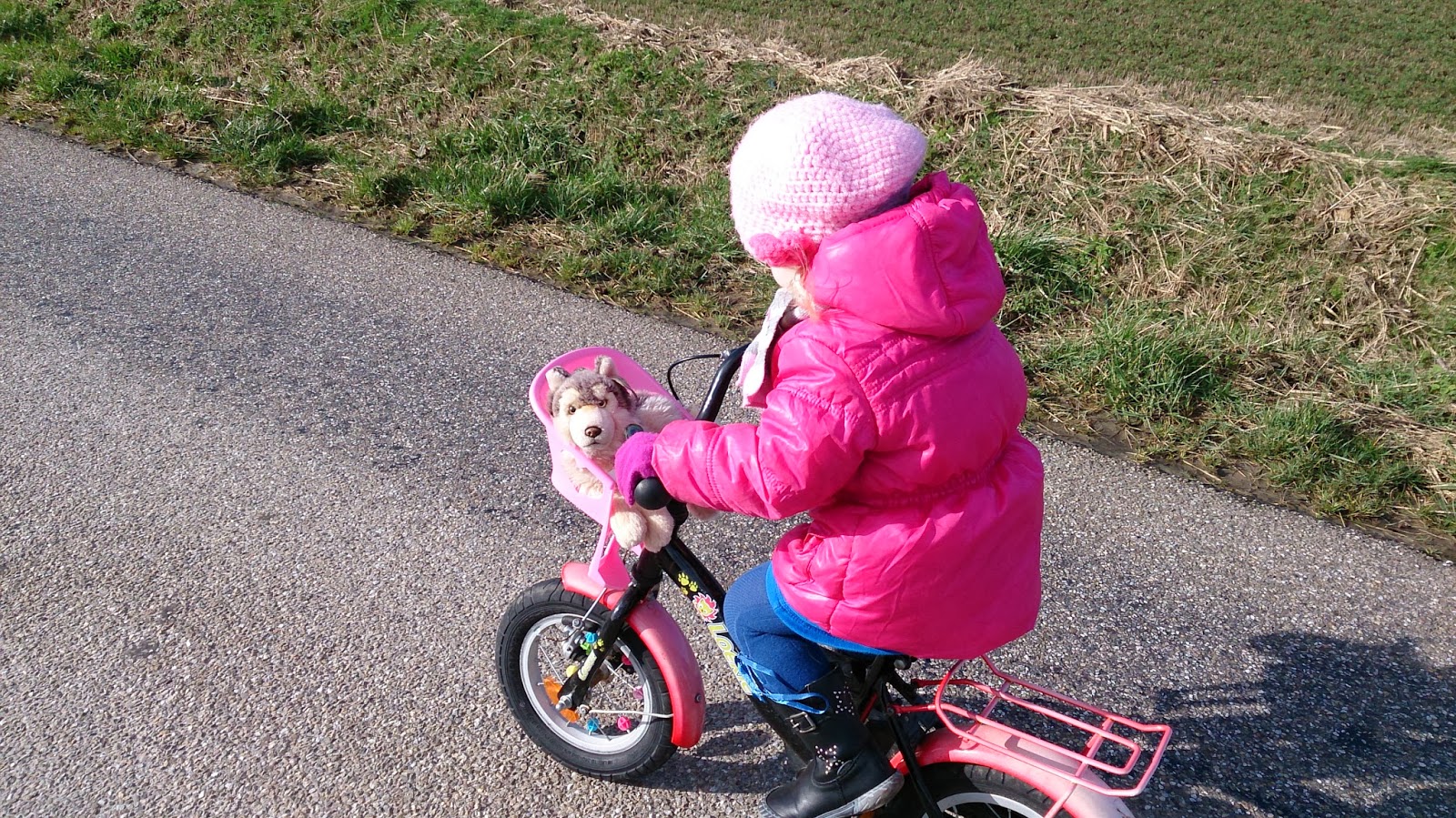 Can you see Sausage???
She is going everywhere, where Kira also goes, so also in the polder on the bike of Kira.


Noah stayed at home with hubby, as he was very ill this week, he has a ear and lung infection, he really was so very ill, it was a terrible sight to see him like that
♥ But he is getting better ♥

WAUW! Lucky you with all the winnings, such lovely items..

Weatherwise...glad the wind slowed down today and on and off Sun...was able to go for a walk at the dyke..it feels goed!
Been indoors lately as it has been 'kracht 8-9'hier op het eiland!
Happy week!!

That's a lovely bracelet !! The fabrics are colorful too !! Congrats on winning so many things !!:)
I hope Noah will ride outside on his bicycle soon with Kira:)

Great start on Jingles :)
I love all the giveaways you won... congrats :)
The box of pink is a wonder to behold!!
Nice to see Sausage out for a ride with Kira... Good to see you have some nice weather at the moment :)
Enjoy!!
Hugs xx

wow, wow, wow and wow =D
Lucky you, you got spoiled with so many beautiful even wonderful gifts...
so super !
enjoy everything, it's so sweet
let's hope that lucky star will stay with you
good you've started your SAL
I so love linen, you'll become addict ! really, the finish is always so beautiful on linen, I love =)
enjoy this stitching
big big hugs
xxxxx
(and such a funny pic of Kira riding towards here hehehehe, with sausage =D)

A lovely stitching start (:
Congrats on the wins - the bracelet is gorgeous!
Have a good week.

Lucky you! I only won one giveaway in my whole life :D
This bracellet is so so gorgeous and the picture she made is beautiful! Your baby's hand is cute with the bracellet and the ring :D
Good luck on your new project!
XOXO, Isa.

Ohhh poor little Noah :( is he still ill???
Best wishes for your little boy! Hope he gets well soon and ready to play outside with Kira and sausage :)

Congrats on your win!! Wonderful gift for little Kira :) lovely!!!

I've seen Rita's start on jingles, now yours.. I want to start mine too!! Hehehehe but waiting a little longer.. Still crafting for my baby boy :) in april I will do my best to catch up with you girls ;)

Oh, you've been so lucky, Annette--the bracelet for Kira is adorable! I hope your luck continues all year :)

Poor little Noah--I hope he's feeling better very soon and I hope he doesn't pass it on to Kira (and Sausage--I just laugh every time I see that name :)

Looking forward to watching your SAL progress--enjoy!! And thank you for showing those spring flowers--it gives me hope that ours will appear (hopefully!!). It is warming up here this week, but gets cold again next. At least we're enjoying a little break from the snow!

congrats for your giveaway win..

Its not very easy to stitch on that fabric...i got my eyes all mixed up when i stitch it lol And i use glasses!! But its very pretty after:)) You will like it;)

Oh you won several giveaways!! How cool is that! Just great!;) That bracelet for Kira is just wonderful:))

Kira is so beautiful...:))
Is Noah better now?? Its terrible to see our kids ills...i feel so bad:(( Hope he's already running around!;)
Have a great week sweetie!;)