I'm busy busy busy, so not much time to post, but had some time to stitch.
It's such a lovely pattern, I'm so in love with it..
Look for your self 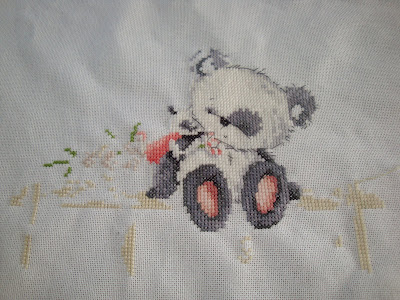 Look at that lovely colors..

I have also been busy with felt and paper. Here are my red roses.. 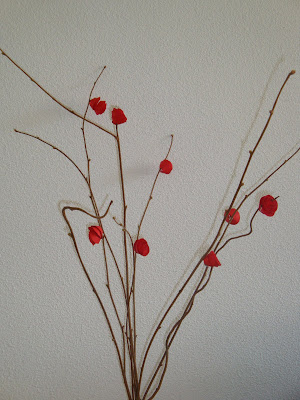 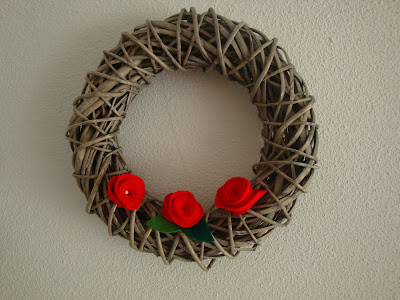 Red felt is so hard to get on the photo. I'm thinking of making more but don't know where to put it, so that's still for the moment more time to stitch on Panda Days.

My baking tour..hihi... I tryed something new what almost nobody knows..
It's called a Bolus here in my dialect it's called jikkemien. The link is in Dutch, because the English page don't have a picture.
Mine don't look at the pictures, they tasted, smelled the same but don't look liked it. So I was looking for a better recipe, and the reason it didn't look the same was beacause of my recipe the rise was to short. So soon I will make them again.
It's our regional dish and I want to learn how to make it.
Here is the pictures of my try

You can't see much because they look like someone sat on them...

Last Friday Noah has fallen very hard, his face was open, a lot of blood. My SIL had her birthday and Noah was playing with her son on the big slide in there backyard. many time they whent on and off, and one time Noah stept of the stepladder and he fell on the grond. OMG I had tears in my eyes so was he screaming. Al the blood was from his mouth he had bitten his tongeu. After a few days it looks better.
Here is a picture 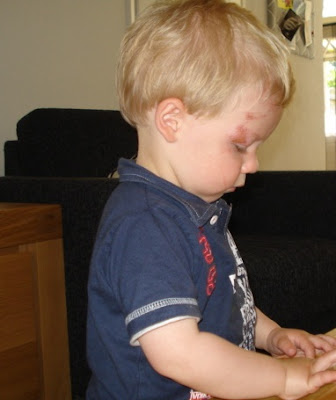 poor poor Noah, this afternoon he was trying to get the crust (hope it's the good translate) and he succeed, then came the crying.. poor boy.

Thanks all for stopping by and leaving a comment

I've never seen that pastry before but it sure looks good.

I guess Noah is going through all the bumps and bruises that little boys have to endure. Glad he wasn't hurt too terribly bad. Just enough to toughen him up!

Your panda is just adorable Annette and your felt flowers are really pretty.
Aww that does look a sore one Noah has, give him a big hug from me.

You sure been busy and creative. That pand is just tooo cute. Lovely felt flowers!

Can't see the picture of the dish now, will come back another time.

Oh, poor Noah. I hope he is feeling much better by now. That is a pretty big bruise. I was watching my nieces baby yesterday and she fell and hit her head and I cried too. We just feel so sad and helpless when the little ones get hurt.
Your panda stitchery is beautiful and so are your roses. Unfortunately I cannot see the picture of your jikkemien but I bet it tasted great. Take care. Big hugs for Noah!
Aloha!