Last weekend FIL came to me, and said he wanted to give MIL a great gift for her birthday.
A ticket to teh new musical Sister Act, who Whoopi Goldberg helped making in the Netherland.
But he didn't like to go and asked me if I would like to go...

Yesterday was her birthday, and we also booked the Sisteract also for yesterday.
DH called up her boss so she had a free day today, because we would stay the night in a hotel.
It was a suprise for her.. and she likes it very much.

In teh morning, when kids wake-up, they gave her a little present I made for them to give 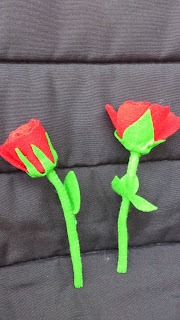 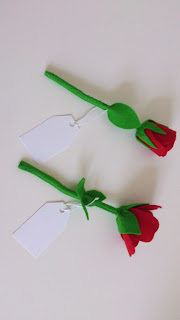 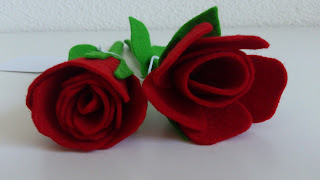 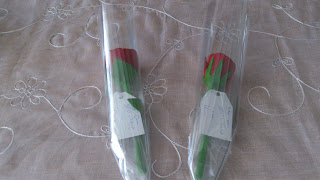 So yesterday we went to SISTER ACT.. and I was so lucky to go with her

We had to drive to Scheveningen it's west in the Netherlands 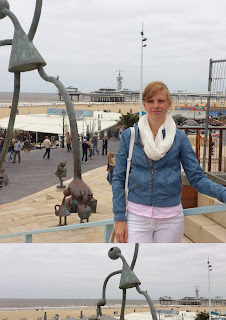 Then we had a lovely diner, I asked if they could do something with her dessert
Look at this 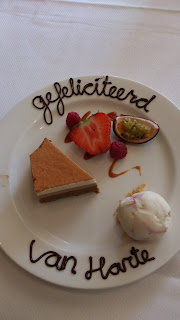 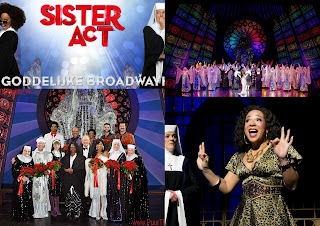 It really was awesome....
So beautiull
Everybody who like sthe movie, or musicals, really need to go to it..
Whoopi helped directing it..
It really was AWESOME!!!!!

Then we also had free tickets to Holland Casino, I had never been there, so love to take a look

The night was still young, so we went to the beach again, and dronk some wine at a cute place with a live music band..

Back at the hotel we found this on our room 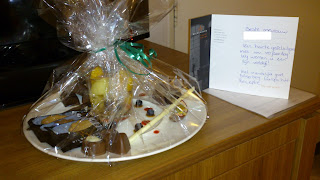 Look at all that chocolate.... mmmmmmmmmm
YUMMY

***
Next morning after a wonderfull breakfast we went back home, because the kids started Satetday with Chicken-pox... poor kids..
After 24 hours of being away at home, teh gave me a big scare.. there faces, there bodys, so many chicken-pox..
Poor kids... Both also have fevers.. so they are very ill..
Kira don't have much problems with teh chicken-pox, she also don't have that many..
But poor Noah.. his body and face are totally full of them..
It hurts, it itch... he has it really bad
Look at this 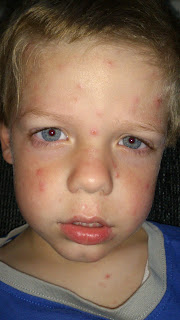 I was enjoying reading about your wonderful weekend with your family. Sorry to see that lira and Noah are down with chicken pox. Hope they will get well soon.

Oh dear I hope they both get well soon..
Sending you all lots of love and hugs x

what a delight to read this post =)
except of course the chickenpox
I hope they both will feel better soon, I can't remember it but I know it's painful =(
it seems you had a wonderful time with your MIL, so super
really happy for you
and the flowers you made are so lovely
your MIL has been blessed =)
big hugs from auntie Valma
xxxx

What a fun excursion and wonderful birthday treat for your MIL. Lucky you to be part of it. Love those roses... that was such a thoughtful touch.

Guess you have to take the bad with the good. But better to get chicken pox when you are young and be done with it. Hope the kids feel better soon.

ohhh little Noah =( looks bad but it's a good thing! The earlier they get this kind of thing it's best. And both at the same time, just like me and my brother :p When one got it, the other got it too heheheh but then we were done, once in a lifetime! hehehe Hope they are both getting better!! hugs to them!!

Oh, sweet Noah--poor little guy! I remember when all three of my boys got chicken pox at the same time, Annette--the oldest was the sickest and the baby (just 9 months old!) hardly had any bad effects.

I'm so glad you enjoyed your trip with your MIL--Sister Act must have been a lot of fun to see in person. I only saw the old movie years ago. That was so sweet of you to make her the roses--I'm sure she felt very special on her birthday :)

Hope Noah and Kira are feeling much better by the weekend!

Sounds like you and your MIL had a lovely time and sweet surprises..